On February 9, 2017 the Gladstone Dispatch and the Liberty Tribune featured the below article celebrating the Assistance League of Kansas City 30 years of generosity. Curry’s very own Ray Brock received a photo of the administrative building to thank him for his support over the years. 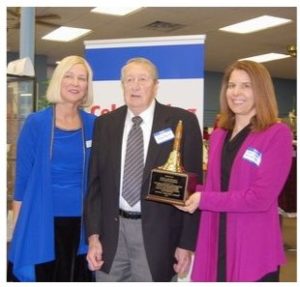 The Assistance League of Kansas City has 10 programs that cover many needs – from the youngest to the oldest members of the Northland community. One of the league’s prominent programs is Operation School Bell.

The children are identified by a school social worker or counselor. Most of the time, they come during the months of September to December. “We aim to clothe them before winter,” Mollohan said.

Merrill said the children get the same joy of starting the school year with new clothes that other children do.

“With middle school children, they head to Target for their shopping,” she said. “Plus the kids get a $30 payless Shoe Source gift card.”

“Kids are greeted and often they get a chance to watch a movie,” she said. “So often, though, they make us thank-you cards. We usually have 10 people here to help the kids. We get the kids to shop one at a time.”

The children also get hats, gloves and scarves, many of which are knitted or crocheted by Assistance League members.

“The kids get two pairs of pants, three long-sleeved shirts and one warm sweatshirt or hoodie,” Montgomery said. “Everyone goes home with a new book of their own choosing, too. They select everything. As a member, we help with selection and encouragement.”

During the celebration talks, the current president, Cindy McGinnis, said it was appropriate to celebrate in the ReSALE shop, which provides significant revenue to the Assistance League.

“A group of women sought to bring an Assistance League chapter to Kansas City, and they started that in 1983,” she said. “About three years later, the group was chartered in 1986. We are celebrating now as we start our fiscal year in June. Our group has grown from those 13 active members. Several are in attendance tonight: Karen Moreno, Judy Chastain, Carolyn White, Elaine Henderson, Judy Frame, Joy George, Sara Hoecker and Barbara Reynaud.”

“Your outreach is amazing,” she said. “You have helped so many throughout the years through ard work and dedication. Annually, you all give 15,000 hours of service.”

“He’s been Northlander of the Year and many other noteworthy accolades, but we will always appreciate him giving us a large space in the Antioch Mall to help with our garage sale,” she said. “That was really the start of the drive to open the ReSALE Shop. He helped us with the property for the administrative center. Ray has been a loyal friend who has even served for years on our advisory board.”

Brock jokingly said he never felt like the Assistance League would last.

“However, with friends like Mary Weishaar, it worked,” he said. “it has been my joy and privilege to come along side this wonderful group.”

Assistance League also thanked the Linscomb Foundation for their support. Gwen Wurst with the foundation said the non-profits fit together well.

“The intent to help children in Clay and Platte counties deserves recognition,” she said.